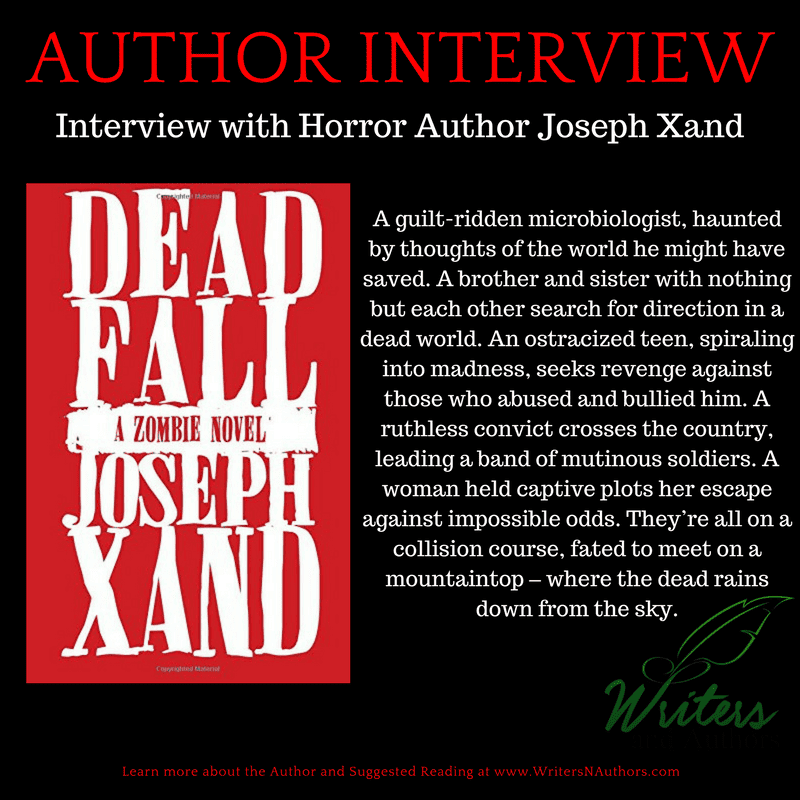 I come up with writing ideas, and I’ll let them germinate for a long time…often years. Over time, I’ll take notes here and there and keep a file for the notes, and eventually, when it is time to start a new project, I’ll look at my notes from my various ideas and decide which one has developed enough to begin.

I have a small woodshop and I like to build things. I grew up dong rough carpentry (house building), but now I’m trying to figure out how to do more detailed woodworking. When not working in my shop, I like watching movies, and hanging out with my wife and kids.

My first book was published in 2012 under a different author name. It is a screenplay formatting guide called Your CUT TO: Is Showing, which, I’m proud to say, has been used as a textbook at the occasionally college and/or university. I guess I was about 39 when I wrote it.

I write mostly horror novels, which is a genre my wife refuses to read. My kids are all too young to read them, so in short: nothing.

What was one of the most surprising things you learned in creating your books?

How much work goes into re-writing. I read and re-read my books over and over and over in order to get them right. I have read very few novels more than once, and those that I have were by authors with names like Faulkner or Vonnegut. I am neither one of those authors.

A guilt-ridden microbiologist, haunted by thoughts of the world he might have saved.

A brother and sister with nothing but each other search for direction in a dead world.

An ostracized teen, spiraling into madness, seeks revenge against those who abused and bullied him.

A ruthless convict crosses the country, leading a band of mutinous soldiers.

A woman held captive plots her escape against impossible odds.

They’re all on a collision course, fated to meet on a mountaintop – where the dead rains down from the sky.

I have written one work of non-fiction (the screenplay formatting guide) and four novels, but only one of them (Dead Fall) has been published so far. The others are works in progress.

Pay attention to details. Research, research, research, so that you look like an expert. For instance, in one scene of Dead Fall, my main character uses a telegraph, which I personally know absolutely nothing about. So I found a telegraphy expert online and we worked on that particular scene for weeks, emailing back and forth until it met with his approval. It is a small scene, with only a few paragraphs dedicated to the telegraphy itself, but I wanted to get it right. To me, details are important. Want a crash course in paying attention to detail? Read some Dan Simmons.

Right now, I don’t have enough readerships, but those that have read my work have said good things. One person told me my screenplay book it the only writing book he takes with him everywhere. That feels pretty good.

Purchase merchandise from Dead Fall and 25% is donated to SPCA of Texas. You can choose from T-shirts, hoodies, women’s tees, and coffee mugs! Click to purchase

Do you like to create books for adults or children…Why?

Adults. I grew up reading horror (Stephen King, mostly), and that sort of literature just isn’t for kids.

I used to like to study dinosaurs and also space. I was fascinated with stars and planets and the unbelievable distance between everything. Still am.

When did you first realize you wanted to be a writer?

I started writing short stories in the second grade. Even then, long before I ever read my first King novel, my stories had a creepy edge to them. I guess it has always been on my mind since then.

How long does it take you to write this books?

When I am focused and writing every day, I can set goals (1000 words a day, for example) and punch out a rough draft in about 4-6 months. But remember, by that time, years of planning and notes may have gone into that particular project. Plus, the re-writing can take every bit of 4-6 months as well.

What is your work schedule like when you’re writing?

I usually like to write from about 7 am to 10 am. I usually try and set goals of so many words per day.

What brought you to write this book series?

This isn’t a book series…yet. I have been playing around with ideas for a couple of possible prequels. Depends on interest, I guess.

How you become a published author? Any inspiration?

Stephen King has always been my inspiration. Sometimes I feel like he is a father figure, even if he doesn’t know I exist. We share the same birthday, by the way.

One day when driving through Upstate New York I saw a house on top of a mountain and thought to myself that the house would make a great place to wait out the zombie apocalypse. This was about 2005. From that sprang the storyline that would eventually become Dead Fall, a story of a man who goes with his family to a house on a mountain only to discover there are no safe havens in this world.

Other ideas come from anywhere and everywhere. I always keep a small notebook in my back pocket along with a pen so I can write them down as they come.

What’s next for you? What are you working on now?

I’m currently working on a new horror novel called The Reaching (NOT a zombie novel), as well as a second edition for Your CUT TO: Is Showing.

A guilt-ridden microbiologist, haunted by thoughts of the world he might have saved. A brother and sister with nothing but each other search for direction in a dead world. An ostracized teen, spiraling into madness, seeks revenge against those who abused and bullied him. A ruthless convict crosses the country, leading a band of mutinous soldiers. A woman held captive plots her escape against impossible odds. They’re all on a collision course, fated to meet on a mountaintop – where the dead rains down from the sky.