I’m a wine lover, let’s start with that.  This was very informative possibly a little gossipy, but its the Vino Business.  We all know Wine is big money but it was interesting to learn about the influence of the international and celebrity investors on the French wine business. The author seems to be bemoaning the loss of tradition in the area. Vino Business: The Cloudy World of French Wine contains a lot of French terms, so as not being fluent in French I did hit a few hiccups. I do feel the translation challenges will be hard for some readers.  Isabelle Saporta shared a lot of knowledge on the direction French Wine’s are heading especially Bordeaux.

I would recommend this book for someone getting into the wine business or for a true French wine lover. 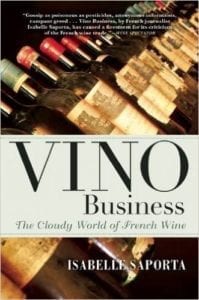 Already provoking debate and garnering significant attention in France and within the wine world, Vino Business is a surprising and eye-opening book about the dark side of French wine by acclaimed investigative journalist Isabelle Saporta. While Bordeaux has been a bastion of winemaking tradition and excellence for centuries, in recent decades the industry has changed dramatically under the influence of large-scale international investors. French insurance companies, international fashion houses and Chinese businessmen are all speculating on the area’s wines and land, some of whose value has increased tenfold in the last decade alone. Saporta investigates in detail the 2012 classification of the wines of Saint-Émilion, the most prestigious appellation of Bordeaux’s right bank, which has come into disrepute, not least because the scoring system was changed in order to give points for a châteaux’s lecture facilities and the size of its parking lot. The quality of the wine counts for just thirty percent of the total score for the wines of the top ranking, those deemed premier grand cru classé A. In other chapters, Saporta investigates issues of wine labeling and the use of pesticides, and draws comparisons to Champagne, Burgundy, and the rest of the wine world.

A shocking exposé of the French wine world, and a cri de coeur for the lost values of traditional winemaking, Vino Business pulls back the curtain on the secret domain of Bordeaux, a land ever more in thrall to the grapes of wealth.  Purchase via Amazon

“Winemaking is often romanticized as the pastoral pursuit of beauty, but in this new book by a French investigative journalist the upper echelons of Bordeaux are depicted as ruled by treachery, corruption, ego and greed, and almost always the deck is stacked against the little guy . . . Saporta focuses on efforts in Saint-Émilion to issue a hierarchical classification of its estates, where a promotion or demotion can mean millions in profits or losses . . . Saporta is sly, sarcastic and melodramatic in a way that may surprise American readers. . . . it’s a world of black and white, not just ‘cloudy’ but downright poisonous.”—New York Times Book Review

“The sordid tale of Saint-Émilion’s troubled effort to establish a classification system, more about politics than quality, and the French wine industry’s struggle with pesticides provide . . . fodder for Saporta’s investigative skills. Vino Business reveals the seedy business side of the romantic world of French wine.”—Washington Post

“ truly eye-opening exposé . . . Saporta sees that winemaking will become a speculative venture that is ‘all about image,’ and with ‘big investors controlling everything,’ small farmers will not be able to afford to stay on their own land and continue making their own very good—and affordable—wine. The author also tackles the knotty problem of wine classification . . . A rude but, admittedly, fascinating awakening from which we all will walk away a little bit jaded.”—Booklist

“ sharp critique of French winemakers, and Bordeaux’s Saint Emilion region in particular . . . Saporta doesn’t pull any punches, portraying an industry rife with enormous egos and long histories of trying to become even more profitable, tradition be damned . . . Saporta is not afraid to name names and highlight the ramifications of a few elites’ backroom machinations on smaller producers, as well as on France’s beloved wine industry as a whole. Saporta’s precision in identifying her targets and laying out supporting evidence adds drama to an already-melodramatic saga, and teetotalers and oenophiles alike will find it hard to resist.”—Publishers Weekly

“Gossip as poisonous as pesticides, anonymous informants, rampant greed . . . the latest primetime TV drama? No, it’s just St.-Émilion. . . . A new book, Vino Business, by French journalist Isabelle Saporta, has caused a firestorm for its criticism of the French wine trade . . . . If it’s causing this much uproar, thinks Lucile Carle, whose family owns St.-Émilion Château Croque-Michotte, ‘it’s because she put her finger on the sore spot.’”—Wine Spectator

“Is Premier Cru wine all just a con? Car parks and bribes influence the classification of wines in the Bordeaux region of southwest France according to new book.”—Daily Mail (UK)

“Isabelle Saporta bases the book on a true investigation, field work that cannot be contested, work that many of her detractors, the people who snipe at her from behind their keyboards, would do well to be inspired by, even if they might not share her conclusions.”—Le Point (France)

“On the basis of interviews with big hitters of the region, the book recounts the almost feudal battles that are waged to change the classification of a château . . . In just twenty years, this wine has lost its magic aura. The decent, less well-off wine-lover must now search out a lesser known producer who is more faithful to tradition and more respectful to nature. Thank goodness such people do still exist.”—La Presse (Canada)

“Vino Business addresses head on the ‘law of silence’ that surrounds the 2012 St.-Émilion classification, as well as the effects of the high doses of pesticides that are used in some of the most reputed vineyards in the world. . . . Judging by the reaction to its publication it seems that this book, which concludes that more transparency is needed regarding the fabrication and classification of these great wines, is asking the right questions.”—Le Parisien

“The seemingly idyllic vineyards surrounding St.-Émilion are depicted as the setting for a sordid soap opera. . . . The author, investigative journalist Isabelle Saporta, doesn’t hold back in questioning the French institutions and traditions that the country’s wine industry prides itself on. She’s also forthright in her writing on certain individuals. . . . The book is a juicy read and is likely to sell a lot of copies.”—Wine-Searcher.com (United Kingdom)

“ the criteria for the St.-Émilion classification are roundly criticized—as they should be. . . . The 2012 classification is being once again attacked in court. If any of the litigants win, that will surely be the definitive end of it.”—BordeauxWineEnthusiasts.com

“There is a vicious power game going on behind the beautiful façades of Bordeaux châteaux. . . . an intriguing book. . . Among the most famous and prestigious châteaux, vino business is deadly serious and, just as in love and war, all methods seem to be fair. If you thought the châteaux were all good neighbours, then you have deceived yourself. . . . reinforces my belief that classifications are completely unnecessary, not to say directly bad for consumers.”—BKWine.com, Sweden

“ laments (both in the book and her interviews) how regions like St.-Émilion that were once home to family producers have given way to multi-millionaire investors. She added that it was easiest to see in Bordeaux as it is the richest region in France but that similar parallels might be drawn in Champagne or even Burgundy.”—TheDrinksBusiness.com

Isabelle Saporta is an investigative journalist and documentary filmmaker. In 2011, she published The Black Book of Agriculture, which sold more than 60,000 copies in France alone. Vino Business is her first book to be translated into English. She lives in Paris, France.