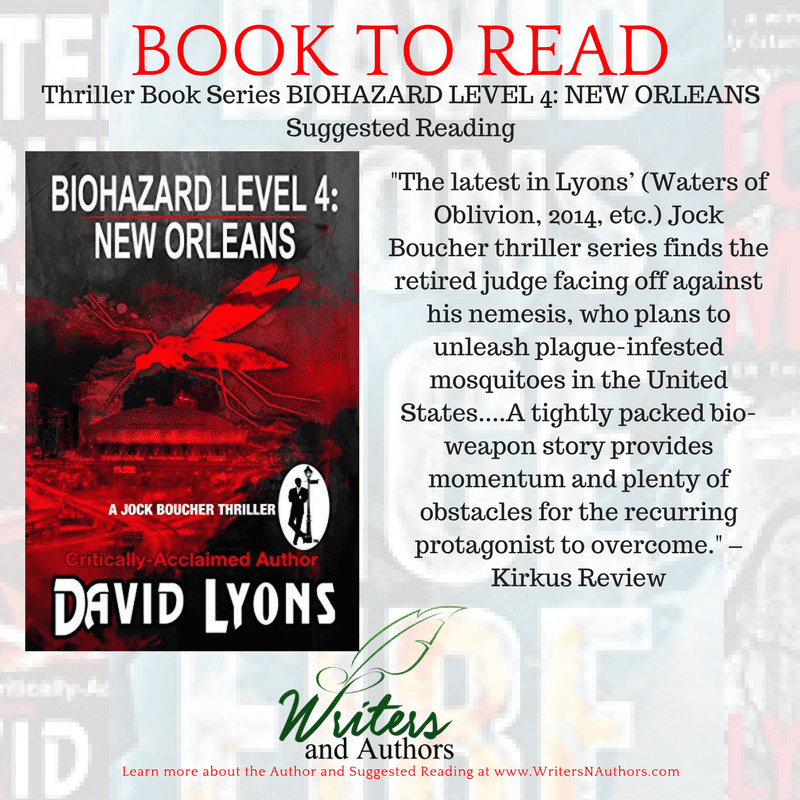 Renegade Cajun Federal Judge Jock Boucher has his work cut out for him, as the fourth book in the critically-acclaimed Jock Boucher mystery thriller, action and adventure series, once again places this unique and charismatic protagonist in the sites of Noble Gunn—one of the most diabolical antagonists in all of thriller fiction. But this time, Gunn deploys a devious bio-weapon, genetically-modified mosquitoes, intending to destroy the city of New Orleans before he takes Jock down. The timing? The annual Jazz and Heritage Festival.
A former Federal District Judge, Jock is currently the richest man in Louisiana after a bizarre inheritance, and has jumped head-on into running his new corporate empire and taking on the former owner’s social obligations, such as joining the advisory board of the Jazz and Heritage Festival—unaware that Gunn is watching his every move.
Adding to the suspense, Gunn’s appearance has been radically altered by numerous cutting-end surgeries to conceal his identity and to heal the near-fatal injuries inflicted by Jock during their last encounter. Gunn has employed Serge Breshensky, former Russian virologist-turned-double-agent, now selling his services to the highest bidder, to engineer the pathogen. With the help of Russian spy Annika Ustinov, a virologist herself with a personal stake in this deadly game, Gunn intends to sell this lucrative commodity to Russia. Developed in the aftermath of the Arab Spring in Cairo, then tested in the Amazon Basin and the Caribbean, this pathogen can indeed end life as we know it.
Rogue CIA Operative Maggie Toussaint returns to find Breshensky after the CIA tracked him to New Orleans, becoming the first to fall ill while renewing her relationship with Jock. Jock’s best friend and side-kick, former NOPD Detective Roscoe Fitch, also returns as Jock’s new corporate head of security, trying to keep Jock out of trouble as he combats corporate in-fighting and dissent in light of his new position, only learning of Gunn’s presence after the lethal brood of mosquitoes have been released. Can Jock Boucher act quickly enough to save his beloved city from the onslaught?

About the Jock Boucher Thriller Series:
With legal strategies that fans of John Grisham will enjoy, military tactics that will appeal to any Tom Clancy reader, and New Orleans southern gothic elements worthy of a Greg Iles thriller, Critically-Acclaimed Author David Lyons’ novels are fast-paced triple threats and exciting treatments of what may be the next conflicts facing not only the United States, but the entire world.