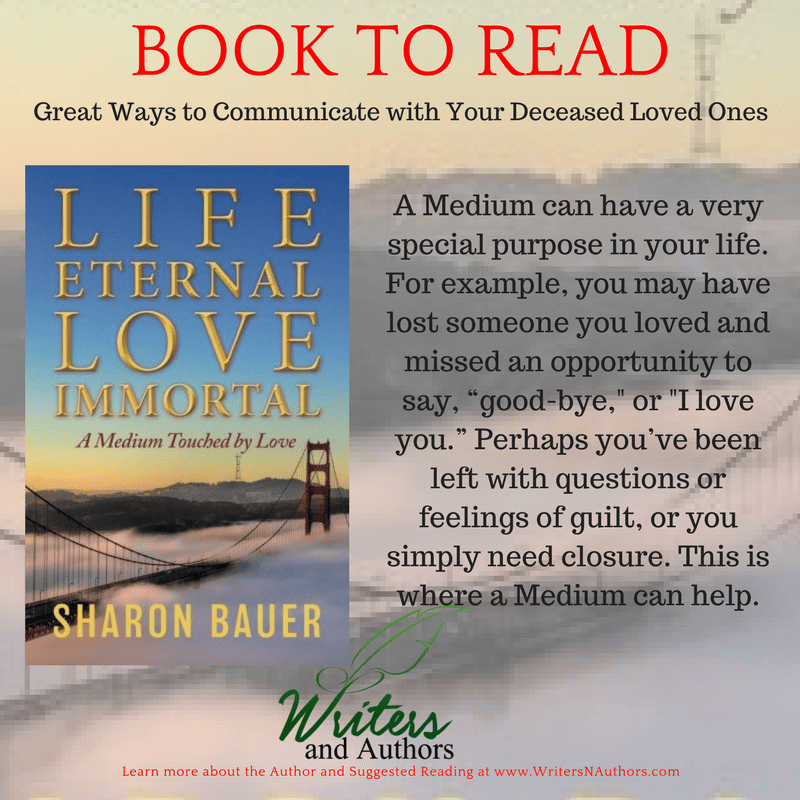 “Great Ways to Communicate with Your Deceased Loved Ones”

Sharon Bauer invites everyone to her speaking engagements and medium sessions where she discusses, how she became a medium and the role a Medium can play in the lives of those left behind after the death of a loved one. At times, spirits or deceased loved ones with relations in the audience come forth.

Since she was a child, Sharon Bauer has been able to communicate with those whom have passed to the Afterlife. Her first experience with death was when she had an awareness of her father’s death before he passed. She was suddenly overcome with the fact that her father he wasn’t walking this earth plane anymore. Her family members didn’t believe her at first, and then the phone rang. It soon became apparent to everyone that this was indeed the case and Sharon had a gift. From that point on, she started receiving messages from others in the Afterlife. They would appear before her suddenly and without warning. Whomever appeared was usually related in some way to whomever she was around. Sometimes, she would be driving and suddenly would hear them speak to her; who was related to someone at the destination she was headed. She enjoys the role she plays as intermediary between people here on this earth plane and those in the Afterlife. She gets tremendous satisfaction from facilitating resolution and healing between the two worlds, in keeping with her former life in medicine.

Sharon Bauer includes in her book “Life Eternal, Love Immortal”, the most moving, uplifting stories that demonstrate how people can receive great peace and comfort through her readings.  The stories she recounts in her book prove that we’re never alone. Life is Eternal.  Death is often called “the great mystery, or the “elephant in the room,” but what if it doesn’t have to be?  What if we could know with great certainty that those who have died still live on and continue to love and protect us?  What if you could ask questions, find clarity, or say the last words you didn’t get to say with sudden deaths?