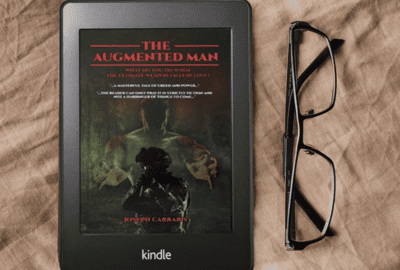 What do you do with a deadly weapon when it’s no longer needed?
Nicholas Trailer is the last of The Augmented Men, beings created first by society and completed by a political group the public can’t even imagine exists. Captain James Donaldson takes severely abused and traumatized children and modifies them into monsters capable of the most horrifying deeds without feeling any remorse or regret
But the horrors of war never stay on the battlefield. They always come home.
Battling what society and science has made him, Nick Trailer discovers he is loved. From the horrors of childhood to the horrors of a war, what does it take for someone to find true love and peace? Especially when everyone has their own agenda, from the senators who sanctioned his making to the Governor of Maine who wants to use Nick’s struggle to propel himself to the White House.
The Augmented Men were good at war, perhaps a little too good. Now they have to come home…or do they? What do you do with man-made monsters? Nick must decide if his friends are his friends and if his enemies are his enemies, all while protecting the woman he loves.
And are you truly the last of your kind?
What if you must remain a monster to defeat a monster? Will you sacrifice love to protect what you love?
Praise for The Augmented Man:
“… a masterful tale of how greed and power can corrupt the better judgement of a man.” -Rox Burkey, co-author of the award-winning Enigma Series
“Emotional and touching.” -John R. Beyer, ex-SWAT, author of Black Opal Books Police Thrillers
“In the same vein as Orson Scott Card’s, Ender’s Game – Joseph Carrabis’s newest novel, The Augmented Man, thrusts the reader into an unknown but realistic world of the future where governments create devastating war weapons of their choosing….This exciting story will make the reader truly question if such things as The Augmented Man could or does exist under the blackness of government secrecy. At the conclusion of the novel, the reader can only pray it is strictly fiction and not a harbinger of things to come in the near future.” – John R. Beyer, award winning author of fictional short stories and novels
“Carrabis writes a masterful tale of how greed and power can corrupt the better judgement of a man. Although this story is set in the future, it actually seems plausible that the sorts of physiological and psychological modifications discussed and inflicted on some of the characters could and have occurred in the name of military dominance. It was fascinating to me how Carrabis compared the capability of Navy Seals as an example against the next gen efforts as well as the results.” – Rox Burkey, CoAuthor of the award winning Enigma Series

Excerpt
1 April 2053
Trailer closed his eyes and sat at the end of the bar where the cigarette burned, cheap black Formica countertop met the wall. He eased himself onto the last stool, tucking into the corner in the dim light, a spider hiding out of sight at the edge of its web. His fingers hovered over the cigarette burns closest to him as if divining their cause, sensing them like small, unhealed wounds, seeing the people involved, learning if each burn was an accident or intentional.
The door opened and he smelled the cool April evening on his skin. It was followed by the alcoholic breath and sweat of two men and a woman they supported between them.
Trailer brought his attention back into the bar, collating the activity immediately around him.
The barkeeper, a heavy smelling man gnawing a toothpick, his face somewhere between needing a shave and growing a beard, walked over to Trailer. “Yeah?”
“A beer. Whatever you got.”
The man grunted and walked to the other end of the bar. When he left, Trailer opened his eyes. A river of tattoos flowed up the man’s left arm. An old style claw prosthetic served as his right, its hinges and catches polished like silver and glinting in the mirrored bar light. He wore black jeans and a tie-dyed t-shirt over powerful shoulders and an ample gut. Trailer closed his eyes again as the man returned. It seemed to Trailer that the man swam upstream in a river of his own sweat.
He placed a bottle of Coors in front of Trailer. “Six.”
“Huh?”
“Six. Six dollars.”
“Can I run up a tab? I’ll probably stay a while.
The man shook his head. “Uh-uh.”
Trailer handed him the money and nodded at the prosthetic.
“Amazonas?”
The man eyed him and shook his head cautiously. “Loreto.”
“I was there, too.”
The man eyed him a moment longer then nodded as he walked away.
“Uh-huh.”
A five-man band walked onto a stage surrounded by a plexiglass cage reinforced with steel fencing, closed the cage door, set up and tested their instruments.
A woman screamed from a room hidden by a beaded curtain.
Trailer stood up. The barman caught Trailer’s shirt in his claw. “You gonna drink your beer or what?”
Trailer stood a head and a half taller than the barman. He said nothing, closing his eyes when the woman screamed again.
“Eddie, Bill?” the barman called out. “We got ourselves a pretty boy here.”
Two scar-faced men got up from a table near the door and walked towards Trailer. He shook his head slowly, searching with his ears as a blind man might search out a strange sound. He moved his head from side to side and made a sound, quiet and deep in his chest, a great cat purring. His head snapped back and shook. He whispered, “No…no,” as if tasting something tart, bitter, something he wanted to spit out.
Eddie and Bill smiled as they moved closer. Thin and wiry, Eddie had a chain around his waist held on by a drop hook. Rolled back sleeves revealed lean, muscular arms, but with shoulders too high and too stiff for the arms they supported. He wore tight-fitting pants and taped his boots, the laces stopping half way up. The right boot’s tape stopped half way down on one side.
Trailer’s eyes snapped open wide and he catalogued, his irises retreating as if aflame. “Parkerized Military Machetes, fifty-centimeter, sheath cross harness. Walther P38 9mm Short nine round capacity, right ankle lift grip, Rockwell C57-59 EK Combat Knife left ankle rip release.”
Bill’s face and scalp looked as if he’d been lyed. Short and squat, the lines on his clothes were clean, hiding no weapons but revealing the scarred musculature common to bikers who played too hard too long.
The woman screamed again. Trailer counted Eddie and Bill’s footsteps by sound, measuring the two men by heartbeat. He felt Eddie’s muscles twitch as Eddie thought about dropping his chain belt.
Before Eddie’s thought became action, Trailer’s spine released and he grew.
The barman’s claw didn’t open in time and he screamed as his prosthetic ripped out of its socket.
Trailer’s eyes closed and his face relaxed, becoming calm, pacific, the face of a child fallen asleep. He brought his head down hard onto Eddie’s skull and smiled at the sharp-sounding crack.
About the Author

Joseph Carrabis is the author of over a dozen novels and hundreds of short stories, including the Nebula-nominated Cymodoce and the Pushcart nominated The Weight. Raised by his maternal grandfather John, Joseph developed a thirst for knowledge that would motivate him to seek immersion within indigenous societies all over the world. These experiences compelled Joseph to help others and have inspired his writing. In addition to writing fiction, Joseph is the author of internationally best-selling non-fiction. Prior to becoming a full-time author, Joseph sat on several advisory boards including the Center for Multicultural Science and the Journal of Cultural Marketing Strategy. He was a Senior Research Fellow at the Society for New Communications Research, an Annenberg Fellow at the University of Southern California, and served with the UN/NYAS Scientists Without Borders program. Joseph was born in Melrose, MA, and currently lives in Nashua, New Hampshire with his wife, Susan, and their two four-legged children Boo and Ghost.
Contact Links
Website
Twitter
Facebook
LinkedIn
Promo Link
Purchase Links
Amazon
B&N
IndieBound
Google
Publisher