What would you do if you began seeing things once you turn 16?

What if you aren’t able to see things that will happen to your loved ones?

Read Hope’s story to see how she handles it.

When the moon is full High above the Earth Three daughters shall be born On their 16th birthday, their destiny will begin One daughter, born with the knowledge of the future, yet blind of those closest to her

As Hope’s 16th birthday nears, weird things begin to happen. Then on the night of her 16th birthday, she awakens with a scream. An unbelievable nightmare becomes her reality, and she begins to question her sanity. As she learns about the curse, she must open herself up to the fact that her life will never be the same.

Bryce, a new guy in town, arrives to help.

In order to survive, three must work as one, or all is lost. Will Hope learn to use her ability in time?

We will choose two lucky winners from all readers. Please check conditions below. It will be a lucky draw.

During the Blog Tour, we will be giving away a signed copy of Hope’s Story and a 10 CAD Amazon Gift Card!

Only one entry per household.

The winner has 48 hours to claim prize or new winner is chosen.

We asked Marsha Black ~ What is your work in progress? 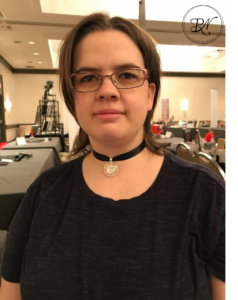 I am currently working on Book 2 in The Triplet’s Curse Trilogy as well as a couple of stories for different anthologies.
Book 2 is titled: The Triplet’s Curse – Destiny’s Story and will be continuing from book 1: The Triplet’s Curse – Hope’s Story.
However it will be Destiny’s story being told and her ability and fight against the evil. You’ll see more interaction with the sisters
Family connection, guys being…well, guys, but in the end it all leads to working together.

I have a mermaid story for Dark Waters A Mermaid Anthology that is to be released at the end of the month, titled: Liasa’s Tail of Woe.
This story is about a mermaid, her love interest and a son of Poseidon. The son of Poseidon wants to usurp his father and rule over the ocean.  He’s a god of Chaos and destruction, so he kidnaps and holds hostage the mermaid, Liasa’s, love interest, who is human, inside a mystical bubble In the ocean, chained to a sunken ship. With the threat of the bubble bursting or the God putting holes in the bubble allowing oxygen to escape and water to fill, Liasa must do as ordered by the God. With each evil deed darkness takes place in her.

I have a Space Opera story for an Anthology titled: Puzzles Amidst the Planets and will be kind of a mix between Men in Black and National Treasure. A detective and alien friend go from planet to planet in search of clues to find puzzles within certain planets. Once all clues and pieces have been found, The pieces will be put together to create a relic that denotes peace between all planets, stopping that war that is about to break out. There will be bad guys Going after the detective and alien to try and prevent them from recovering the pieces, since their species want the war to happen.

Mother of 2, avid reader, lover of anything and everything paranormal/supernatural. Enjoys reading, watching TV, and hanging out with her kids. Hopes that through her written books, readers can escape from reality, as many books did for her. Writes clean YA/NA, with some toe-dipping in other genres. Loves reading reviews and interacting with new readers/fans, so don’t be afraid to befriend and/or get in touch with her.

Wednesday, June 13
Review at My Book Blog
Spotlight, Excerpt & Review at A Bibliophile’s World to Share

NEW BOOK ALERT: Marsha’s Next Book in the series will be coming out soon !!!! 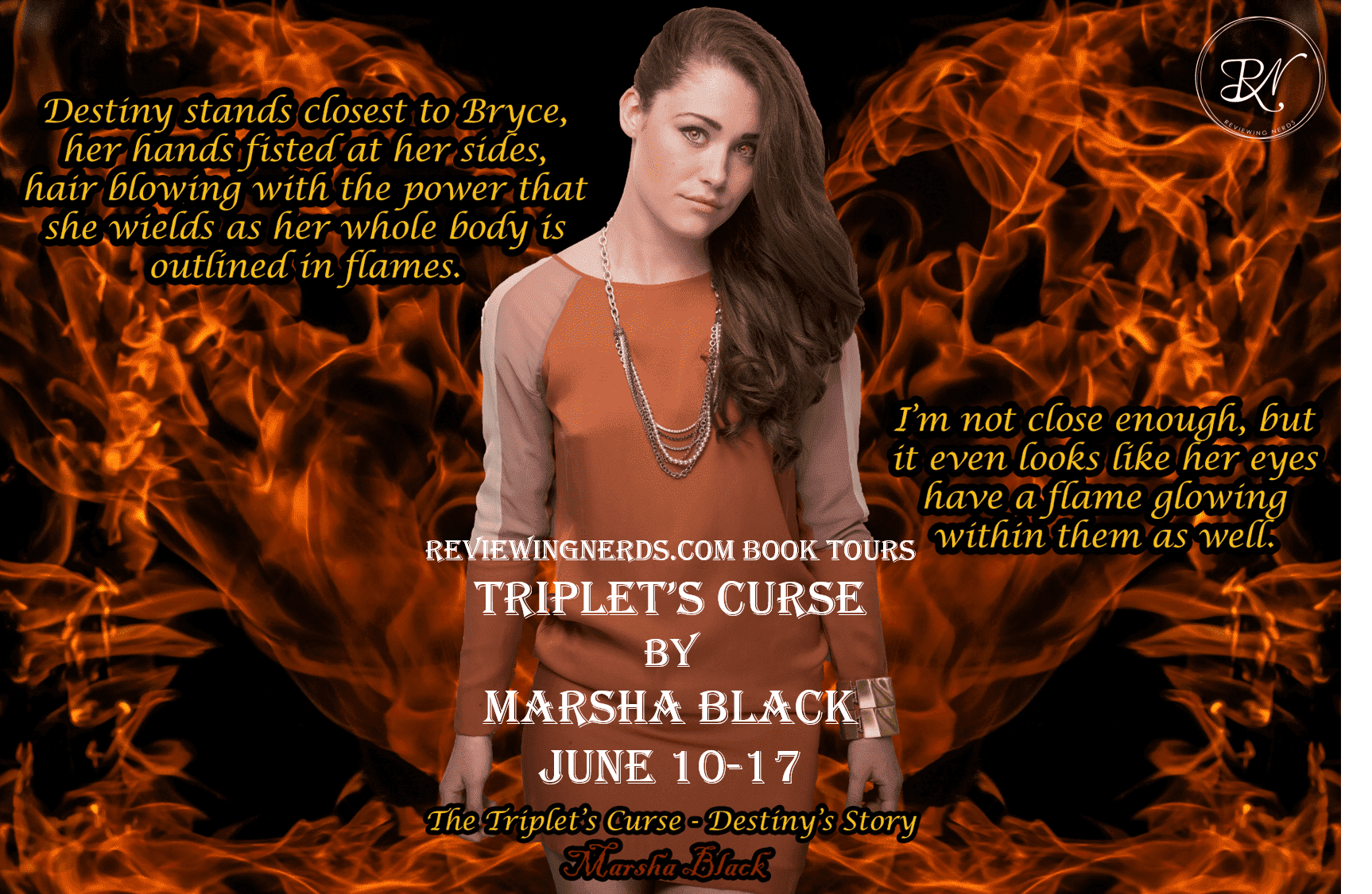 For once I’m glad it’s Monday. I got my butt chewed for not having said anything sooner about what I had seen with Destiny. What’d they expect me to do after no one would let me in the house after Destiny had locked me out?

If I had walked through the front doors instead of walking around the neighborhood, I would’ve punched Bryce’s front teeth out. Straight up, the douche would’ve deserved it.

I did feel a little bad that I didn’t think of smoke coming off of her, as possibly being a part of her ability.

I mean sure, Hope’s ability didn’t come out until she started training and her anger and irritation at Bryce triggered it…

Ohhh, duh! With everything Destiny has been through, it makes sense that her ability is already showing. But which part of the prophecy does she fall into?

Bryce and I are supposed to see if the sisters can come over today, so we can all talk and get on the same page, since the dad’s decided that the girls shouldn’t be left out of the loop as this whole thing is about them.

Personally, I think they should be on a need to know basis, and they only need to know enough to fight the evil and then go back to living their life, so we can do the same.

I kept to myself for the rest of the weekend, as I didn’t feel like socializing and listening to Bryce and our dads go round and round trying to make heads or tails out of everything.

Haven’t they figured out by now, with everything that has gone on with Hope, that we are way off the play book of everything we were ever taught. Our education is sorely lacking at the moment, and we are sorely unequipped.

Bryce and I ride in silence to school, and I hop out before Bryce even has his car parked. I take my time walking towards the entrance of the school, which allows Bryce time to catch up to me and we walk through together.

As Bryce and I head in their direction, Destiny walks past her sisters and walks away. I call after her, but instead of turning back towards me, she increases her pace, reaching the front office before I can get to her.

Geez, I know I’m not the nicest guy in the world, but I’m trying to make up for the major faux pas I did when I tackled her.

I decide to wait her out, but as the first bell rings, it interrupts my plans, so I hurry to my locker to drop off my backpack and grab my books for my classes that I have before lunch. With barely a minute to spare, I notice Destiny at her locker, which happens to be just a few down from mine.

As I get closer to her, I notice how tense her body looks, and that she hasn’t glanced in my direction or turned and ran yet. Something’s wrong I determine as my stomach tightens and bile rises in my throat. My reactions almost cause me concern; however, it’s overshadowed by the lack of…well anything…coming from Destiny.

I walk around her locker and stand directly behind her. Almost but not quite close enough to cause the spark to occur. I look first at the inside of her locker door, and all rational thought flees my mind, as disregarding my need to prevent the spark from being seen by Bryce or the sisters, I turn Destiny to face me, and pull her tightly into my arms. Trying to soothe her as I remove the horrible sight from her vision.

Destiny begins to shake in my arms and knowing I’m at a loss as to what to do; I pull out my phone and shoot Bryce a text.

I try to soothe Destiny as best I can but feel so awkward. How do guys handle girls when they get in these types of moods? I continue to hold onto her as I turn my back to the lockers and slide us down until I’m sitting on the floor and she’s resting on my lap.

I steal a quick moment to breathe in the scent of her shampoo and to appreciate the feel of her in my arms, knowing that if I have my way, this will be the last time she’s there.

Except for Faith, Bryce and Hope arrive barely out of breath. Worry shining brightly out of the sister’s eyes; they reach for Destiny, pulling her out of my arms.

“Can you girls keep her facing away from her locker for the time being, please?” I ask.

They agree and turn her away from the locker, yet they stay facing me. I open the locker door wider, allowing them to see what Destiny and I had already seen.

Hanging on the inside of the locker door, is a picture of the sister’s. Destiny’s face was scratched, almost unrecognizably. Hope’s chest had a dagger shoved into where her heart would be, and Faith had her eyes ripped out and mouth sewn shut.

Inside the locker were some dead mice, dried blood and what appears to be human teeth.

The girls gasp in shock and Bryce reaches for Hope, grabbing her hand.

“Baby, Blake and I will get the locker cleaned out. You girls either take her to the nurse’s office or see about taking her home. I’ll text you later to make plans for after school.” Bryce tells Hope.

“Ok. Please make sure to get the locker as clean as possible. I can’t believe we forgot to check her locker, just like we didn’t think to check her room. We’re horrible sisters!” Hope replies eyes watery and voice wavering.

“Like Bryce said, you girls go do what you gotta do. We’ll take care of this, and by this time tomorrow, any proof of what this locker contained will be removed.” I speak up.

“Thanks guys,” Faith says, as she and Hope lead Destiny towards the nurse’s office.

“Dude, can you run to my car and grab a trash bag and cleaning stuff I have in there, so we can get this done without bringing attention to it from the school and other students?” Blake asks me, once the girls are out of earshot.

“You got it!” I say as I head out towards the car to get the supplies needed to clear this piece of horror out of Destiny’s life.