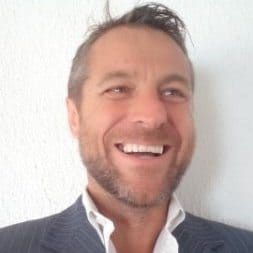 Quote from your Book | Favorite Quote Thousands of horns blared simultaneously, wrenching his attention directly in front of the gate. He had to crane his neck to look down from his perch. He saw a Tular, vaster than even Tevok, stride through the gate, carrying no weapon save a club and wearing only a thin gold crown and a loin cloth. As he stepped through the gate he turned to the multitude behind him, not acknowledging Sithral or Tevok atop the Dias, and roared, a primal scream of triumph and bloodlust that curdled the very air around him. Sithral threw his hands over his ears to protect them as the scream dragged on. From the other side of the Portal the echoing roar could be heard from the assemblage, a rolling wall of noise that travelled back through endless battalions and continued for many minutes.

As a child, what did you want to do when you grew up? So many things, changed constantly. Though nothing that I can say was a calling or dream as some people do.

When did you write your first book and how old were you? February to May 2017. 45 years of age.

How did you begin writing? Did you intend to become an author, or do you have a specific reason or reasons for writing each book? I have always been an avid reader, mostly Sci Fi, Fantasy and History and have harbored a desire to write a novel for some time.

What would you say is your interesting writing quirk? Complete lack of grammatical knowledge and limited spelling

Do you like to create books for adults, youth and/or children? and Why? Young Adults (physically and mentally)

Action, adventure, and fantasy. It is what I know

How many books have you written? Which is your favorite? This is my first novel, many more to come I hope

Could you describe the mundane details of writing: How many hours a day to you devote to writing? Do you write a draft on paper or at a keyboard (typewriter or computer)? I generally walk around 6:30 am coffee and read the paper etc

Maybe some editing and corrections in the evening

What does your family think of your writing? Surprised. Initially , my wife figured I was doing it to avoid chores and gardening

What do you like to do when you’re not writing? Read, Squash, hike, visit local wine farms and work on my vege garden

What do you think makes a good story? Something that grips the reader, makes them forget where they are and be transported into the novels world

What was one of the most surprising things you learned in creating/writing your books? How bloody hard it is and how many people are willing to give there time to help you write

What authors do you like to read? What book or books have had a strong influence on you or your writing? Feist, Jordan, Tolkien

Loved Magician the first time I read when I was 10, had read the Hobbit previously but this was the first non child’s fantasy novel I had read

BU this was the book that made me a fantasy junkie

Do you hear from your readers much? What kinds of things do they say? My novel is only being released in November. Currently completed editing and has been sent to print

Where do you get your information or ideas for your books? My brain, imagination and deep store of old stories jumbled in

Do you have any suggestions to help me become a better writer? If so, what are they I am definitely not in a position to give advice yet, maybe after my third book

Do you meet your readers at book signings, conventions, or similar events? I hope to

Tell us about your most resent book? Moosi’Kar

Madruk El Adruk, third son of a Noble Empire family is destined for a lifetime of service in the priesthood. Desperate to avoid this fate, Madruk uses his mother’s connections to gain a military commission to the far northern province of Bayathu, a heathen desert kingdom newly acquired by the Empire. Famed for its white walls, fabulous wealth, and puritanical devotion to the Fire God Vul, he expected little chance of adventure as it was too far from the centre of politics to gain any visibility at court. Once in the Fire Province Madruk learns that everything he had been told was a lie and that the Empire is on the verge of a catastrophic war. The fabled Obsidian Gate must be closed to block entry by the Demons of the Cataclysm. Madruk, with an unlikely group of friends, will face dragon riders and giants in a desperate battle to survive.

How do books get published? I sent my unedited manuscript to three Publishers

Do you write every single day? Most

Wine ready for end of day

What’s the worst job you’ve had? In Israel I worked on a fish farm at a kibbutz, once for being hungover they made me clean to filters in the old pond

Tell us some more about your book/s. This is my first novel, old school epic fantasy with action, adventure and complicated characters

Are you planning to adapt any of your stories to the screen? I would love to

How hard is it to establish and maintain a career in writing? ask again in twelve months and I may know

Please look out for Moosi’Kar from November 2017 in bookstores across US an Europe plus on kindle, ireader etc

Get book updates on https://www.facebook.com/ObsidianGateSeries