The Boy From Allahabad is about the life of a boy abandoned at the confluence of three holy rivers in Allahabad, growing up to become a crime lord. Efforts to quit the life of crime took him to Asia, Europe and America.

The book opens up with a petty theft, it’s a fantastic visuals (supported by visuals of a Northern Indian Village)  opening of the landscape, the bugs, and life for this young boy trying to find his way, poverty-stricken Balu lived in a shack he built with his own 2 hands out of clay and hay.

There is a few visual in the book of the Kumbh Mela and a procession of the powerful and mystical Naga Baba during Kumbh Mela (Kumbh Mela, also called Kumbha Mela, in Hinduism, religious festival that is celebrated four times over the course of 12 years, the site of the observance rotating between four pilgrimage places on four sacred rivers—at Haridwar on the Ganges River, at Ujjain on the Shipra, at Nashik on the Godavari, and at Prayag (modern Allahabad) at the confluence of the Ganges, the Jamuna, and the mythical Sarasvati. Each site’s celebration is based on a distinct set of astrological positions of the Sun, the Moon, and Jupiter, the holiest time occurring at the exact moment when these positions are fully occupied. The Kumbh Mela at Prayag, in particular, attracts millions of pilgrims. In addition, a Great Kumbh Mela festival is held every 144 years at Prayag; the 2001 festival attracted some 60 million people.)

The Boy From Allahabad had several strong and well-written characters, I really enjoyed the book it was actually educational for me as I’m not familiar with the area and or the religion.  It was an enjoyable story to follow the tale of Balu and for his search for peace and love.

Balu is blinded by his own ambition and goals which cases his to slip deeper into the criminal lifestyle. Finding himself through Religion he defines himself as a Hindu (Hindu refers to any person who regards themselves as culturally, ethnically, or religiously adhering to aspects of Hinduism. It has historically been used as a geographical, cultural, and later religious identifier for people indigenous to the Indian subcontinent.) and a Muslim (A Muslim (Arabic: مُسلِم‎) is someone who follows or practices Islam, a monotheistic Abrahamic religion. Muslims consider the Quran, their holy book, to be the verbatim word of God as revealed to the Islamic prophet and messenger Muhammad. The majority of Muslims also follow the teachings and practices of Muhammad (sunnah) as recorded in traditional accounts (hadith). “Muslim” is an Arabic word meaning “submitter” (to God)), went on to win university elections and rule Allahabad through drugs, love and the ability to make good judgments and quick decisions, in business.

Allahabad is one of the oldest cities in India. It is crowned in ancient scriptures as ‘Prayag’, ‘Prayagraj’ or ‘Teertharaj’ and is considered the holiest of pilgrimage centres of India. Allahabad is mostly populated by Muslim’s, the city has seen multiple religious riots but the communities continue to live together in peace.

… Blinded by ambition, he only slipped deeper until it was too late. And then, Allahabad came to rescue once again…
Allahabad, the holy Hindu city situated at the confluence of three rivers – sacred Ganga, mighty Yamuna and invisible Saraswati, hosts the largest gathering of humans ever – the ‘Kumbh Mela’. It has a sizable Muslim population (Allahabad – place of God) and is known for producing disproportionate number of prominent politicians.

Born and abandoned helpless during Kumbh Mela in Allahabad, Balu found himself through Gods, religions and ambition, and went on to lead a high life of crime and politics. Defining himself as both Hindu and Muslim, he ruled Allahabad through drugs, love and acumen.

Efforts to quit the life of crime took him to Asia, Europe and USA
but to no salvation… 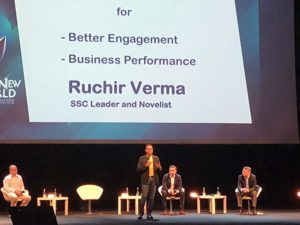 Ruchir Verma is the author of worldwide popular book ‘The Boy from Allahabad’ which is under consideration for a major movie.

Ruchir was born in India and after living there until his graduate studies, he worked in various countries in Asia and Europe before settling down in London. He currently lives in Switzerland.

Ruchir has an engineering degree, an MBA, and LLM in Corporate Finance Law. He is keenly interested in topics of Humanity and Human psychology