Strong Characters and an Exciting World

Tracing Shadows is the first book in the Scout series by author Alex Lidell. Alex Lidell may be one of my new favorite authors. I enjoyed this book and can’t wait to read book 2. Tracing Shadows is builds slowly, but comes together without a hitch. The characters were well written, the world was a different and interesting world, land, of course, a developing romance. This book also has twists “girl disguised as a boy”, the King forces 17-year-old spy Kalianna to pose as a palace guard as well as Lady Lianna of the court. If she doesn’t comply, he’ll hurt her sister. I love a strong female character!

The audiobook really made the story come alive. The novel is very fast-paced and is filled with courtly intrigue, danger, adventure, and mystery! The narrator did an amazing job Hayden Daviau is perfect one of the better narrators that I have had the pleasure of listening to. Portraying the emotions of each character and the different voices were great too! Hayden is a good choice to narrate this story.

Alex was able to create another really cool, unique world. I am really excited to see what will happen next, especially with the bombshell 🙂 I’m hoping to learn more about Trace, Luca, and Leaf in Book 2. Be ready for the ending what a cliffhanger The ending left me wanting more!

Suitable for a YA or adult audience, Tracing Shadows is a fun addition to the genre. 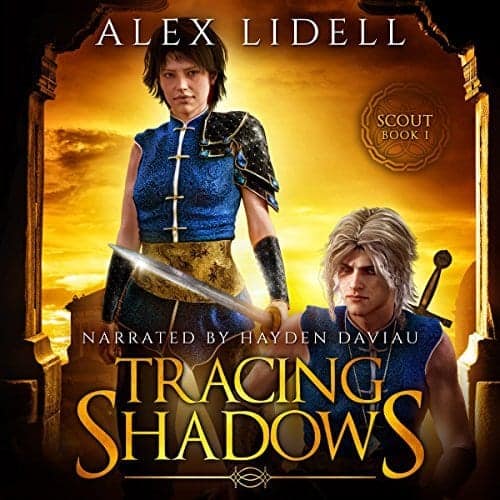 Synopsis: To protect the throne, 17-year-old spy Kali must play a male guardsman trainee by day and royal lady by night.

Orphaned and trained on a spymaster’s remote estate, Kali is a scout who works alone in the shadows. But when a terror group threatens the Dansil throne, the king forces Kali to accept a mission at the palace or forfeit her sister’s life.

Suddenly thrust into the light, Kali must infiltrate high society as the royal Lady Lianna while penetrating the servant ranks as Kal, a male guardsman trainee. It doesn’t help that Trace, the harsh and enigmatic captain of the king’s guard, is soon assigned as both Lady Lianna’s palace escort and Kal’s commanding officer.

As Kali edges closer to the truth behind the violent group’s identity, she uncovers dangerous secrets that could bring her mission to a brutal end. A scout’s job is to observe and report, never to engage…but if it means saving her sister and kingdom, Kali may have no choice.

I received this audiobook as part of my participation in a blog tour with Audiobookworm Promotions. The tour is being sponsored by Alex Lidell. The gifting of this audiobook did not affect my opinion of it.