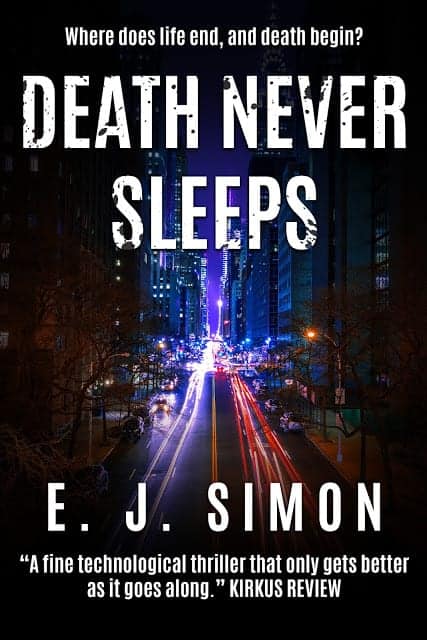 I’m a huge thriller fan so the title and cover grabbed my right away. Death Never Sleeps is the first installment from the Michael Nicholas series by E J Simon. was a fast-paced psychological read that keeps you on your toes with its plot twists.  I’m having trouble classifying the genre its definitely a Murder Mystery with a bit of A.I and Suspense. Its a fun mix of corporate greed, murder and crime.

I quickly fell in love with the characters,  engaging concept and storyline, with intriguing and complex characters. Fair warning the ending has such a huge cliffhanger, I was excited to have book 2 on hand to pick up right away. Alex, a bookie, is gunned down while on the phone with his brother, Michael. Michael ends up taking over his brother’s business no one is safe and Micheal feels the need to find the murderer. The characters are all well-developed and the plot unpredictable.

Where does life end, and death begin?

Brothers, Alex and Michael, weren’t particularly close in terms of their careers in their later years. But when Alex is murdered, Michael finds it necessary to keep Alex’s business running, at least for the foreseeable future.

With very little knowledge about what Alex actually did for a living, little does he envisage the level of complication this entails. Working closely with his cousins, Fat and Skinny Lester, Michael starts to get a sense of what needs doing … in whatever way Alex would have dealt with things.

But, when Alex’s current wife, and his two ex-wives, surface and start to dish out demands, Michael finds himself going deeper and deeper into Alex’s personal space. All his ex-wives knew there was money left hidden … but only Alex knew of its exact location.

When Russell, an old friend of Michael’s, and Alex’s most trusted person, offers to help Michael find the money, Michael feels he can start closing up on Alex’s loose ends and move on with his own, increasingly complicated life.

Until … Russell is brutally murdered …

Someone else is after Alex’s money … and it’s not a friendly person.

But is Alex really dead? Or is he as dead as he has prepared himself to be?

Michael is beyond confused … is he imaging the conversations he’s having with Alex? But Alex was shot dead in his own restaurant, one filled with policemen. Surely, Alex is dead?

Whichever way Michael tries to rationalize things in his head, Alex’s support is beyond what he needs. Finding himself face to face with a crook, Sharkey, one who has no qualms about killing people, one Alex was in debt to, Michael takes on Alex’s advice … dead or not!

As the number of deaths rise, Michael and his wife, Samantha, are left on their toes. Would they ever feel safe again? Is anyone safe? And how far did Alex go with his new venture?

E. J. Simon is the author of three commercial fiction thrillers, Death Never Sleeps, Death Logs In and Death Logs Out. He has just completed his fourth manuscript, Death in the Cloud.

He is a member of the Authors Guild, the Mystery Writers of America and the North Carolina Writer’s Network. He holds an M.A. in Corporate & Political Communications from Fairfield University and a B.A. in Journalism from the University of South Carolina. He lives with his family in Cary, North Carolina in the United States. For more information, visit his website: www.ejsimon.com.