Dragonia: Rise of the Wyverns 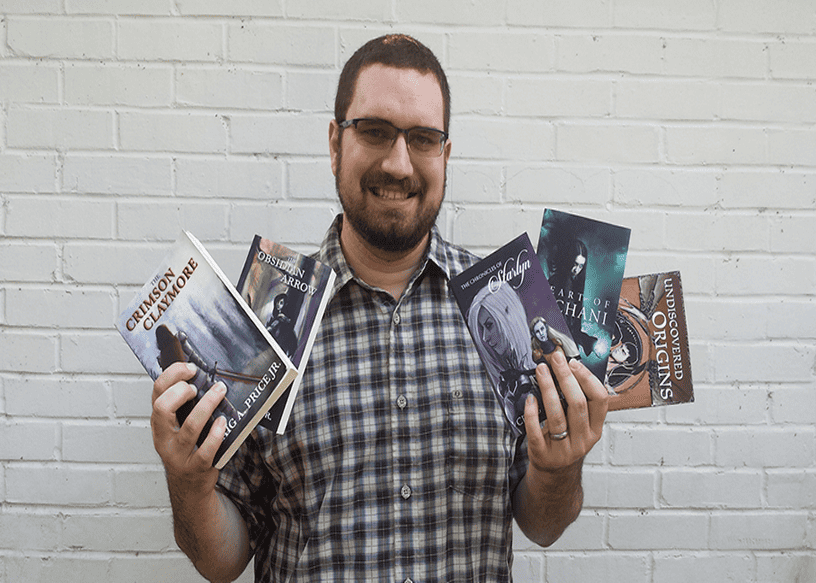 Tell us about the process of turning your book into an audiobook.

I uploaded a sample file onto ACX with a few different types of scenes from several different chapters and put it up for auditions. =)

Do you believe certain types of writing translate better into audiobook format?

Yes. Dialog heavy writing translates good into audio. It makes it sound more like a movie as you’re listening. Also, you don’t want to be too heavy with dialog tags in audio.

Was a possible audiobook recording something you were conscious of while writing?

For the first few books I wrote: no. But for this book, yes, absolutely. In fact, I had the paperback and audiobook published before the eBook.

How did you select your narrator?

I listen to a LOT of Audio Books. Probably 2-3 every week. I knew I wanted a great narrator. Being so big into audio, I get audio codes from several authors. Well, I had this gentleman, Reuben, inquire me on a message via ACX for my first audio book, The Crimson Claymore. He was wanting to know a little bit more about the book. I listened to a sample on his profile and liked it, and sent him a message. I didn’t hear back. He was tied up in several other projects. Then I got an audio code from one of the authors I review for. It was a short book, just over an hour. Reuben was the narrator. I listened to the book and loved his voice. When I finished Dragonia, I immediately messaged him, asking if he’d audition for Dragonia so I could hear how he’d handle a particular humorous bickering scene between two characters. He did, and he nailed it. I offered a contract to him immediately.

How closely did you work with your narrator before and during the recording process?
Reuben and I worked pretty close. It was a bit refreshing when compared to past narrators. Since I’m so big into audiobooks as a listener, I really wanted to be a part of the process to make it the best it could be. He’d email me every time he uploaded a few chapters, and I’d listen to them as he recorded the next, making any notes of any changes that needed to be made. By the time he finished uploading, all the adjustments had already been made.
Did you give them any pronunciation tips or special insight into the characters?
Yes. I gave him a pronunciation guide, and we talked on the phone for a bit where I pronounced characters for him.

Are you an audiobook listener? What about the audiobook format appeals to you?
Yes. I listen to a lot of audio books. I love it because I can listen while at work. For several years, I worked a labor job, and listening to audio books was what got me through the day. I love the voice acting. When a voice actor is good at making unique voices for the characters, it sounds like a movie playing in your head–except even better!

If you had the power to time travel, would you use it? If yes, when and where would you go?

Middle Ages, Europe. I’d love to see all the castles, peasants, and royalty of that time period to really get a feel for how it was.

What do you say to those who view listening to audiobooks as “cheating” or as inferior to “real reading”?

There is a concept that has been lost in recent years: Every Person Is Different. This is why I can’t get behind Common Core. In Mathematics there are hundreds of ways to find the answer to a single problem. So, why are children now forced to do it only one way, and if they do it in a different way, they’re considered wrong? There have already been studies for different types of learners: visual, auditory, reading/writing, and kinesthetic. Some people retain a book a lot better by listening because they’re an auditory learner rather than a reading learner. It is not ‘cheating’ or ‘lesser’ because someone is different than you. We need to embrace our differences, and stop dictating how everyone should be.

How did you celebrate after finishing this novel?

What gets you out of a writing slump? What about a reading slump?

Researching random stuff. It makes me excited to use it in a story somehow or read about it somewhere.

In your opinion, what are the pros and cons of writing a stand-alone novel vs. writing a series?

With a stand-alone, you only need to write one book. In a series … well, usually, there’s more than one. However, I love series because of character development. I love being with characters long than one book.

Movie ~ The Illusionist, The Princess Bride

Are any of those things referenced in appearance in your work?

What bits of advice would you give to aspiring authors?

Don’t give up. And finish your projects. The hardest part is finishing your first book.

Do you have any tips for authors going through the process of turning their books into audiobooks?

I have lots of tips on this one. I made a very large post about it in the Facebook group: 20Booksto50K. I’ll try to sum it up here, and you can find the post for more details. But, have a top notch Audition Script. Don’t just put Chapter 1 on there. Put a few paragraphs from each chapter, and make an introduction to each scene. Try to have pieces of each style of your writing. An example would be: Narrative, Male/Female dialog, Humours Dialog, Action Scene, Romantic Scene. You don’t need a lot from each, but it’s nice to hear the narrator’s full range by putting a piece of them all into an Audition. It also gives them room to use their voice. Start each scene with a summary for them so they know the background of the scene and characters. Next, have a detailed Audio Book Marketing Plan. I keep all my data in spreadsheets. And talk with your narrator to help you out. This should be a team effort. If anything, having the narrator’s codes to help you promote is a big help.

What’s next for you?

My narrator is already working on Dragonia 2, and I’m currently writing Dragonia 3! I’m also working on a co-author project I’m very excited about!