Author Interview On the Fault by Ronald J. Wichers

Author Interview On the Fault by Ronald J. Wichers

In your book, you state that the earth is “brokenhearted.” Why is that?

A friend once asked me, “What is life?” I have wondered about that all my life. I’m not a pantheist but I love the earth and I worry not only about what we have done on it but what we have done to it. I do believe that, in the end, there will be only love. But this penchant we humans have for war horrifies and saddens me. Poverty, greed, war, ignorance, tribalism, hate swirl across the face of the earth like that giant storm visible on the planet Jupiter, making the face of our own celestial home seem all too often like a broken-hearted lover – sad and perhaps even vengeful.

If you could put yourself as a character in your book, who would you be?

How long have you been writing?

Since 1974 – an outgrowth of a Creative Writing course and other courses in Literature and History at UNLV together with biblical and theological studies at The Graduate Theological Union in Berkeley, California. On The Fault, all in all, took about seven years to complete.

Do you ever get writer’s block? What helps you overcome it?

That doesn’t happen. I always have ideas for stories.

What is your next project?

I want to write more short stories and produce a collection which will include Myrmidons – a collection of stories set during the Vietnam War period.

What genre do you write and why?

I write about war and religion. The bulk of what I have written is about religion, specifically the Roman Catholic clergy. Love Beneath the Mighty Dome is a trilogy of novels about the ancient, all male institution of the clergy.

I think I’ve written about these two aspects of life, religion and war, because they are at the very center of human activity, swirling about inside us all like two boxers splattering blood on each other and the spectators, tainting each other endlessly, whether we are aware of it or not. How many terrorist groups, including those that have sprung from the hearts and minds of Americans, are based on religious fervor? Virtually all, I would guess. I have a theory that all…all prejudice is rooted in false religion.

What is the last great book you’ve read?

Stendhal – The Red and the Black.

Where do you write?

In a small office in the house.

Do you write every day?

I write twice a day, every day – in the morning and evening.

What is your writing schedule?

Five a.m. to about eight in the morning; then again at the same times, in the evening.

Is there a specific ritualistic thing you do during your writing time?

I really like to drink coffee while I write.

If you could go back in time, where would you go?

I would love to see the rebuilding of the structures on the Acropolis by Pericles. 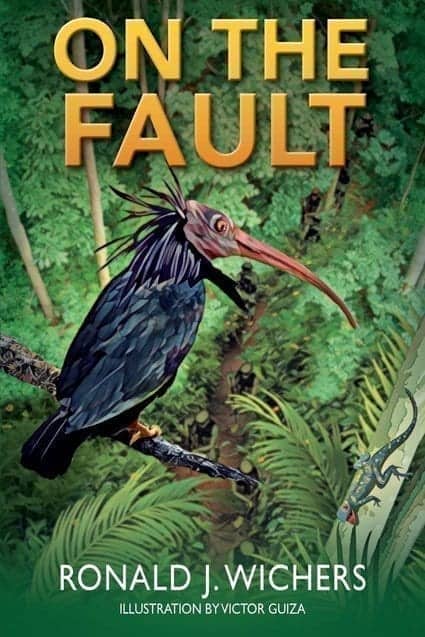 On the Fault by Ronald J. Wichers

“The heart of the planet is broken and the world is bleeding. We come out of the broken-hearted earth and try to mend it.”

True grit mixes with true wit in this tragic, yet strangely triumphant tale of how much one man can lose. Following the Vietnam War, life proves bittersweet as Joe Hearns learns that sometimes finding happiness means changing the definition.

For Joe Hearns the horrors of combat give way to those of daily life upon return to the States; a life burdened by an odd curse that seems to hover over the heads of anyone who fought in that otherwise magical land. He discovers that courage takes on a whole new meaning when coping with a world moving at a different pace – the pace of friendship and love. But, in the end, this proves the way out from under the curse of the war no one wanted.
​
When it comes to this soldier’s story the word fearless comes to mind.