You Are Going To Die (And That’s Okay) Suggested Reading 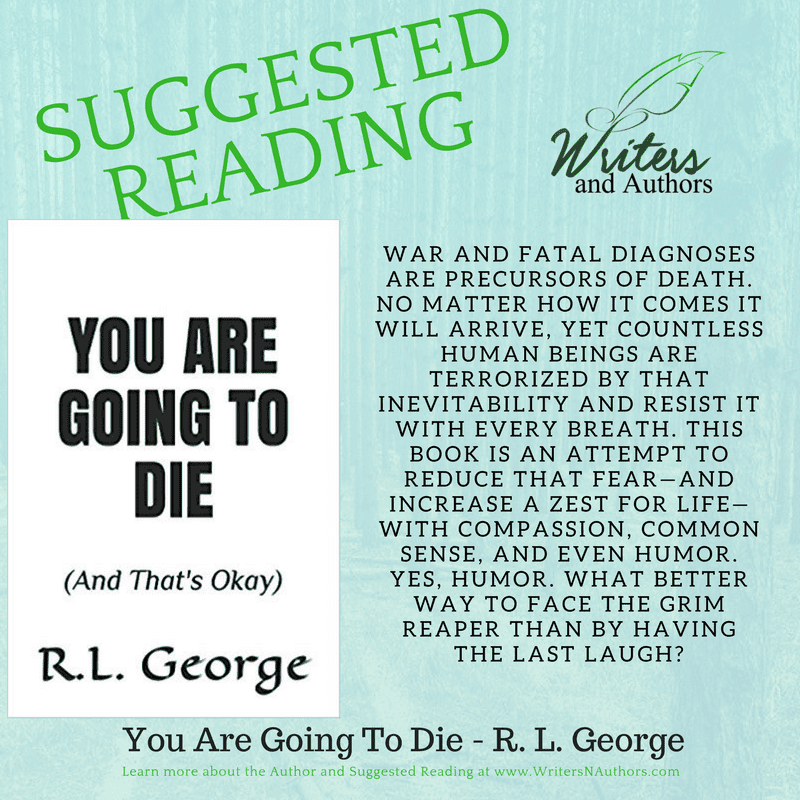 You Are Going To Die (And That’s Okay) Suggested Reading

Who knew there were so many angles to the topic of death? People live, someday they’ll die, seems pretty cut and dry. But no, there’s a myriad consideration of when and how death comes, whether it’s after 90 years of breathing, or during the throes of youth. An accident may take a life, while others are murdered, and some commit suicide. War and fatal diagnoses are precursors of death. No matter how it comes it will arrive, yet countless human beings are terrorized by that inevitability and resist it with every breath. This book is an attempt to reduce that fear—and increase a zest for life—with compassion, common sense, and even humor. Yes, humor. What better way to face the grim reaper than by having the last laugh?

I’m impressed with the talents of R.L. George. Her incredible gift as a writer and the subject matter she delves into always challenges the reader to learn more about themselves and place in the world as a human being. Death is not to be feared but confronted headlong with courage and deep insight.

R. L. George is a philosopher/author. She is a veteran of the U.S. Navy, and has worked in corporate business and in the semiconductor industry, as well as in construction and rare book sales. She has also worked as a musician, a farmer, an auctioneer, an educator, and national book reviewer/contest judge. She has lived in a number of U.S. states, Canada, and Mexico. Her education includes a B.S in Interdisciplinary Studies, an M.A. in Humanities, and an M.A. in Philosophy. She is currently a PhD candidate in Psychology. It has always been George’s belief that general education includes equal amounts of life experience and scholarly pursuits.

Connect with the Author www.author-rlgeorge.com

The memoir of Will Carr, As Told To Rebecca George.  “Will Carr’s account of his remarkable travels around the Mediterranean more than half a century ago is invigoratingly fresh and vivaciously perceptive. Travel writing, coming out story, historical document, “Crossing Borders” is a rewarding memoir on all levels, the saga of a rich gay life from a senior still firing on all cylinders.” — Richard Labonte, Book Marks, Q Syndicate
Available at Amazon http://amzn.to/2pAgmlJ

By the year 2060 the world’s population has been drastically reduced by a proliferation of wars and diseases, and because one disease specifically targeted males, females are now the vast majority. Thus begins the ultimate battle of the sexes. With women in political control, society has become nearly idyllic—but only for the female sex. A faction of men is determined to return to the old ways, which ended in the first quarter of the twenty-first century. Peace now reigns in the new society, so how can women stand up against men who will use violence to regain control? Is it even possible for peace to prevail against weapons of mass destruction?

Praise for A Thousand Reasons:

The plot is strong, full of surprises, and the ending is killer. A fascinating book. – Taylor Jones

On a par with George Orwell’s 1984, A Thousand Reasons is incredibly thought provoking, a clear statement on where our civilization is headed if we continue on our current destructive paths. With interesting characters who are very realistic, a complicated plot full of twists and turns, and a totally unexpected ending, the story is a great read. – Regan Murphy

This is an unsettling reminder that extreme wealth, power, and righteousness are a dangerous blend, and that laws don’t always flow in every direction. – Laurie Stapleton, PhD

Breaking Freedom is fantasy mixed with mystery, an engaging tale of corruption and good men fighting against seemingly insurmountable odds. The characters are realistic, and the theme of skewed morals at the highest levels is unnerving. – Pinkie Paranya, Award Winning author of Women of the Northland Trilogy