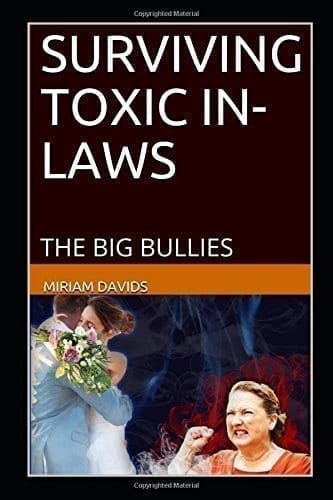 We have all heard about these HORRIBLE Mothers-In-Law (aka Monster in Law) and many have had to deal with them.  One of my favorite movies is Monster-in-Law – 2005 this is one of the 1000s of great quotes “Ruby: [to Kevin] You’re bringing a girl home… now? She’s just got off from the funny farm! “

Its such an issues there have been songs, movies, and book written on the topic.  Today I’m reviewing Surviving Toxic In-Laws: The Big Bullies by Miriam Davids.  First this off this book can be used as a guide for the new couple or even for a couple that has not taken control of the MIL situation. It walks you through taking the toxicity out of your life and save your marriage.  You can feel the personal experiences, the ideas and techniques are based on real-life situations.  “Toxic-In-Laws” is perhaps the single biggest cause of this vulnerability because they were “toxic parents” long before they became toxic-in-laws. You’ll recognize some of your in-laws if there’s dysfunction in the family you married into and be offered ways to disengage effectively so their impact on your life is minimized. Good advice on dealing with difficult family members without starting a World War. Surviving Toxic In-Laws: The Big Bullies is a good way to analyze your own response and whether it is helping or hurting. Has the added benefit of being short and to the point. There are positive strategies for trying to salvage the relationship and excellent strategies to cut the bonds if that is necessary.

Urban Dictionary defines Mother in Law as…
An evil deceptive creature , who likes to analyze your every move,
Condemn you, and leave you to die.
Often bearing a strong resemblence to Skellator from He-man ,or a Vulture.
Also see ” angel of death”
Or “entity from hell”
a horrible beast. Strangly enough the letters in ‘mother in law’ can e re-arranged to spel ‘Woman Hitler’. its true try it urself
mother-in-law—-> woman hitler

“Viola Fields: Marriage is a sacred union which must only be entered with the utmost care.
Charlotte ‘Charlie’ Cantilini: Weren’t you married four times?”

The author has a website www.AboutToxicInLaws.com you should check it out a fact that is shared on the website is “90% of posts here are from people who have undergone what you are currently passing through and would share ideas on how to successfully deal with a toxic in-law”  You can also follow the Author on Facebook

About Toxic In Laws

Ever wonder why most people around the world do not get along with their in-laws? Is it all about the adage that has been in existence for ages – “When you marry someone, you do not marry the individual. Instead, you marry the person’s entire family”? If so, should this give some in-laws the right to be cruel and nasty to new members of the family?
This book introduces readers to simple ways they can recognize, handle and survive toxic in-laws while protecting their marriage.
Surviving Toxic In-Laws is a couple’s guide to building and creating a more united front as a couple. Written for all couples, married or not, that desire to uproot any ounce of toxicity sprouting from their in-laws. Written for couples currently under the wrath of toxic in-laws and are eager to acquire ways on how to cope with toxic in-laws; gain tips on how to counter their toxic in-laws’ evil actions with wits about them, especially if they want their marriage to survive against all the odds. This book gives readers:
-Practical insights on how to deal with the toxic parent in laws.
-Everyday steps for handling overt controllers, manipulators, and narcissists
-Tips to tackle different issues.