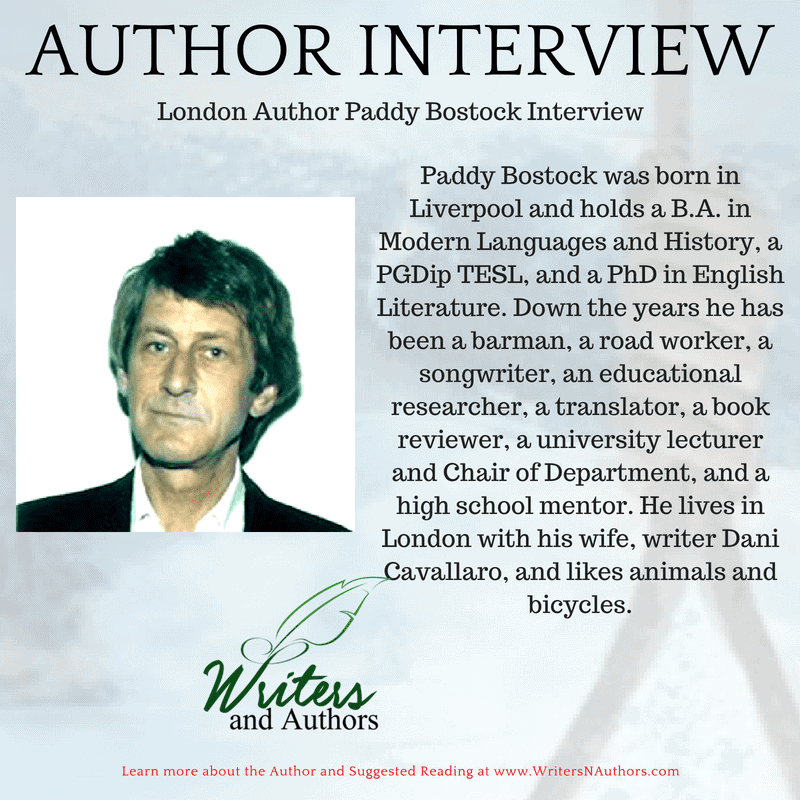 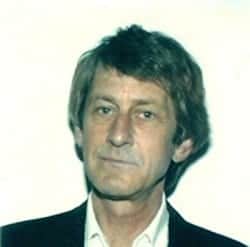 Paddy Bostock was born in Liverpool and holds a B.A. in Modern Languages and History, a PGDip TESL, and a PhD in English Literature. Down the years he has been a barman, a road worker, a songwriter, an educational researcher, a translator, a book reviewer, a university lecturer and Chair of Department, and a high school mentor. He lives in London with his wife, writer Dani Cavallaro, and likes animals and bicycles.

What would you say is your interesting writing quirk? Fiddling about with the conventional genres and trying to create crossovers.

What do you like to do when you’re not writing? Cycling, doing crossword puzzles, playing guitar, talking to my wife, seeing my kids, and sitting on a park bench thinking about nothing but the birds and the trees.

When did you write your first book and how old were you? I was in my late twenties. It never got published, of course, and just as well. From around the same time I was also writing poems, songs, newspaper reviews for the Times Educational Supplement, an EFL class book, and doing translations from German.

What does your family think of your writing? My wife likes and encourages it. She has also helped hugely with all aspects of the books’ production. One of the grandchildren quite likes the idea of me being an author and reckons he might become one himself.

What was one of the most surprising things you learned in creating your books? That as long as I got a decent start thereafter they more of less wrote themselves.

How many books have you written? Which is your favorite? Fourteen. To be honest I don’t have a favourite because I have no clear idea of how good or bad any of them are.

Do you have any suggestions to help me become a better writer? If so, what are they Use any little snippet of information you have locked away in memory, let your imagination run riot, and pay no attention to what anybody else thinks.

Do you hear from your readers much? What kinds of things do they say?  Apart from occasional, mainly positive, reviews I never hear from readers.

Do you like to create books for adults or children…Why?  Adults. I need the range of experience.

What do you think makes a good story? Something I like to read.

As a child, what did you want to do when you grew up? Play for Liverpool Football Club or be a Beatle.

When did you first realize you wanted to be a writer? When I was at school. My dad reckoned I’d never make a living from it though, and he was right.

How long does it take you to write this books?  Normally around a year including edits.

What is your work schedule like when you’re writing? Every day between roughly four and seven in the evening.

How you become a published author? Any inspiration? With a great deal of luck after about a zillion rejections. Never say die.

Where do you get your information or ideas for your books? From all over the place. Ideas seem to come out of the ether and then I make the information fit. What are so great though are Google and Wikipedia. If you’re trying to find a street name in Minsk, for example.

What’s next for you? What are you working on now? Since 2016 I’ve been pretty knocked out by political events on both sides of the Atlantic so the latest book, Chosen, deals with their fallout and a somewhat fanciful means of attenuating it.