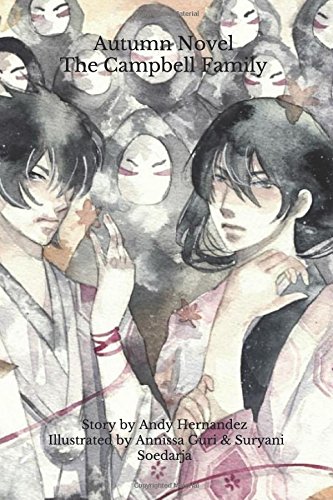 What’s next for you? Answer: I think getting out the sequel to this novel is next. I’ve already started working with some of my artist(Shiro, Sury and Hiro) for the sequel so I’m very excited on that, it’s going to be called Autumn II: Strings of Fate.

What was one of the most surprising things you learned while creating your book? Answer: How much time and effort goes into editing.

What age group do you write for? Answer: I feel as if teens/young adults will gravitate towards this novel more.

How long did it take you to write this book? Answer: I had rough ideas for the novel during Junior year of high-school(2013). I didn’t start writing until 2016-2017 so it took me about a year to write and edit the novel.

What works do you draw inspiration from? Answer: Certainly the shonen manga D-Gray-Man by Katsura Hoshino. The Noah Family gave me the inspiration to create The Campbell Family in my novel.

What do you want people to gain from reading your book? Answer: An attachment to a character/(s). I love asking people who read the novel who their favorite character is.

Will the sequel be the final installment of the Autumn Series? Answer: This will conclude the story for sure…I plan on having a spin off novel where all the other side characters are featured instead of the three main protagonist Jayden, Gavin, and Elizabeth.

Where can people buy your novel? Answer: Exclusively on amazon at the moment, both paperback and electronic copies available.

Can twin brothers Jayden and Gavin Blackwood protect their war-ravaged world from more chaos and violence?

Will the power of the brothers’ bloodline be enough to stop Yale Campbell’s search for the three keys needed to open the Serenity Seal?

In this magical adventure of deadly creatures and ruthless, power-craving villains, courage and bravery aren’t enough to survive. The Cambell family, allied with the criminal organization Primrose, will let nothing stop them in their devious plan to declare the next Autumn War.

Follow Jayden and Gavin in this thrilling adventure as they use all of their powerful abilities in the battle to save the world from disaster.

What will you do after the Autumn series concludes? Answer: I want to work on some slice of life/mystery novels after the Autumn Series. I loved the Goosebumps series growing up, writing a mystery based novel with supernatural elements would be fun for me.

Any last comments? Answer: If you’re a fan of action novels or shonen manga I would recommend checking out the Autumn series. Thank you for giving me this platform.