The Writer of Dytin’s Stones: Windrider 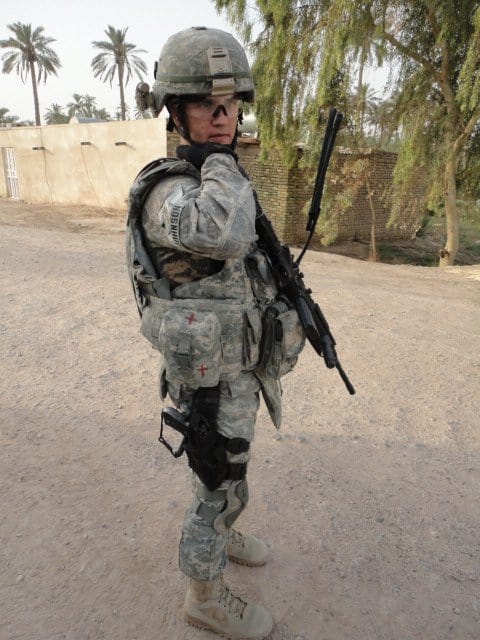 “The drawback of having a sheltered childhood is that someday those walls have to come down, and mine came crashing down on September 11, 2001. I was in my junior year of High School. I was wondering who I would take to the Winterfest dance in a month. I was worried about petty, selfish things. Then I watched those towers come down. I also watched the after-effects of that day. I watched people come together unlike ever before. I watched rescuers scour through rubble to find anyone they could. I joined the Army as soon as I was able, on September 14th, 2002.

I’m a two time Iraq Veteran with extensive combat experience. I am currently a Paramedic in Raleigh, NC. But what I love to do is write. I started writing as far back as the third grade. I’ve always had an over-active imagination, I just never knew where to use it. By the time I was close to graduating High School I was writing 50-60 page short stories while my peers were struggling with five-paragraph essays. The inevitability in writing novels was apparent to everyone who knew me.

But writing in a void is like paddling a canoe with a strainer. So I went out into the world. I served in the military, healed my neighbors, experienced life. Now I can explore complex themes like love, heroism, freedom, and death. Feel free to look through my blogs and of course, pick up a copy of my books.

Let us explore these themes, together.”

How did you do research for your book? I wanted to keep a lot of the roots of Dytin’s Stones in American influences. I looked at the indigenous peoples, American history, culture, and geography. I also wanted to challenge literary tropes in the genre, so I looked at a lot of analytics of the fantasy genre, the hero’s journey, and a lot of like genre works. Video games and movies are always a great influence to draw inspiration from too.

Which was the hardest character to write? The easiest? For the first book, the hardest character to write was probably Prince Edmund. Making a compelling antagonist is always difficult. It’s easy to make a likable character, but villains have the danger of becoming Saturday Morning Cartoon stereotypes if you don’t think things through from their perspective, and that’s tough to do when you don’t have a lot of experience of being self-centered.

I’d say the easiest character to write was April. She is such a strong-willed person, independent, and funny. She wrote herself basically, she just used my fingers to do it.

In your book you make a reference to…. 9/11, Veterans, War how did you come up with this idea? I wanted to write about heroism, and how the U.S. especially has a very construed view on how that works, how war is in real life, what we should be honoring in our society and what we shouldn’t. I feel like wealth and fame is valued, and we say someone is “heroic” for things that aren’t. In order to cover these topics, I had to draw from my own experiences, and being a 9/11 Veteran, serving in Iraq and the U.S. Army for 14 years, it was only logical that I pull from those experiences to make my points.

What made you write a book about heroism? I was always confused when people would say “thank you for your service” and then be so quick to call for war when we hadn’t even finished the first one. For my generation of veterans, we felt surrounded by it. War was everywhere, forever, never ending. When we’d come home from one, we’d leave for the next one. Even when we’re done, our battles won, our feet on the coffee table, we still relive those traumatic events over and over in our mind. I don’t think people see that, let alone experience it. I wanted to show what “heroism” is like from the perspective of those the people praise. I wanted to show people what it’s like.

Where do you get inspiration for your stories? I wanted to use a context that was far removed from the contemporary politics of our world. I didn’t want the themes and messages to be lost. With that, I thought that the “Knight in shining armor” trope would be perfect for my purposes. I combed through the genre, which wasn’t difficult as I’ve been an avid reader/viewer/game player of the genre since I was little, and saw what worked and what didn’t from other sources. I formed my own world, formed an origin story, and it was off to the races.

There are many books out there about…. Heroes, What makes yours different? My hope is that my unique perspective into contemporary conflicts helps tell a different kind of story than one most readers are used to. I’m banking on readers having certain expectations of what heroes are and what their kinds of stories entail. Then, I flip the table on them. I think that’s what sets me apart.

What advice would you give budding writers? Keep Writing. Even if it is horrible, even if it doesn’t make any sense, just keep doing it. Doesn’t matter the genre, or the characters, or the scene. The hardest and most enjoyable parts of writing is doing the actual writing. Keep at it. Read it over. Throw it away. Start again. Keep Keep Keep KEEP writing.

Your book is set in (The Kingdom of Lochkary, on the fantasy world called Teva). Have you ever been there? Teva is sort of my dream world. I cobbled together places I made up as a kid. My old make believe lands, where I’d run around in my back yard, envisioning I was slaying monsters or saving damsels. Captaining a pirate ship or riding across great plains. I may have never physically left my home, but I have gone to Teva many times in my mind.

If you could put yourself as a character in your book, who would you be? I feel like many of my character are a little part OF me. A writer writes what s/he knows, and I know a lot about myself. Some of my quarks and mannerisms managed to make their way into most of the main cast. I feel like they are common things that will help readers identify with at least one person along their adventures.

Do you have another profession besides writing? Yes, I was a Captain in the U.S. Army where I served for 14 years. I served two tours in Iraq and received a Bronze Star. I am also a Paramedic with Wake County EMS in Raleigh, NC, where I have helped my community for over five years.

How long have you been writing? I’ve been making up stories and writing them down since the third grade, but really only been productively writing since High School, so for about twenty years.

Do you ever get writer’s block? What helps you overcome it? Yes, and I usually let my writing find its own way. I’ll put project down for months, sometimes years, until an idea comes to me on how to resolve whatever issue I’m having in the narrative. If I’m bored or frustrated with a story’s plot, then how is the reader going to feel? Better to leave it be until something better comes to mind.

What is your next project? I’ll be working on the Dytin’s Stones series for the foreseeable future.

What genre do you write and why? I don’t feel constrained to a single genre really, I don’t want to be a one-trick-pony as it were. I like to decide on what message I want to convey, or what theme I want to play with, then find a genre that fits. I have written a sci-fi novella and have a few ideas for other genre work. I’m not married to just fantasy books.

What is the last great book you’ve read? All books are great in their own way. Some are great at showing you how not to write something. There’re truly too many great works to name in one interview.

Do you snack while writing? Favorite snack? Not really, gets the laptop keys all sticky.

Where do you write? Anywhere, Everywhere. I’ve written outside, in an office, in the back of a Humvee in the sands Iraq.

Do you write every day? No, maybe once or twice a week

If you could go back in time, where would you go? I’d like to visit certain major events in history, experience ancient cultures, but I wouldn’t want to live in any other time but now. Better to make our current world into our dream world than to pine for a time that once was.

When surrounded by constant war, the people are starved for a hero. Samuel Gale grew up hearing stories of epic warriors, fantastic sorcerers, and of his father fighting on the front lines. So, when magical spirits call upon him to discover old family secrets, the once farm boy from a sleepy village is thrust into events that will shape the world, and Sam must play a role he doesn’t completely understand. Join him on his adventures through magical ruins, bandit infested woods, and much more. Come see just how incredible the world of Teva can be…

Let’s Get to Know B.C. Johnson This or That

Interview with Marilyn Poscic author of Last Soul Standing Surviving My Last Surviving Relative and Angels Simplified! Q: When did

How do you identify and gain the attention of the right kind of influential people who can help you succeed?

How do you identify and gain the attention of the right kind of influential people who can help you succeed?

“You did it! I knew you wanted to do this for a long time.  So many people are dreamin’ forever