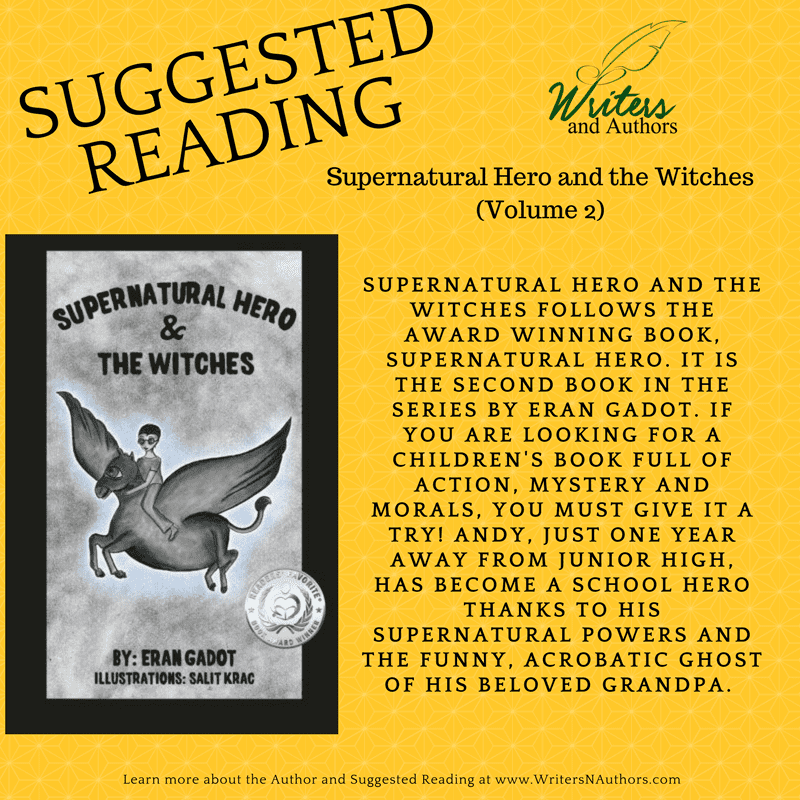 Supernatural Hero and the Witches

Supernatural Hero and the Witches follows the AWARD WINNING book, Supernatural Hero. It is the second book in the series by Eran Gadot. If you are looking for a Children’s book full of action, mystery and morals, you must give it a try! Andy, just one year away from junior high, has become a school hero thanks to his supernatural powers and the funny, acrobatic ghost of his beloved Grandpa. He manages to defeat evil powers and witches, to break a dangerous magic spell, and to win the heart of the most popular girl in the class. “…Grandpa’s fighting the witches. He’s holding a shining spear in his hand and it’s shooting out multi-color laser beams. The witches are trying to attack him. It’s the first time I’ve seen a real supernatural fight… One of the witches is sneaking up on him from behind… At the last second Grandpa pivots, his spear connects with the evil black spirit and she gets smacked right out the window. Next I hear a bloodcurdling scream…” Supernatural Hero and the Witches is the newest in the series of suspenseful adventures about Andy, the boy who can talk to ghosts.

I recently read the first book in this series, so when I saw the second part was released I bought it right away. I also read it right away, before gifting it to my nephew, for whom I originally bought Book 1 in the series.

I loved visiting with Andy again, and following his adventures as he battles ghosts and witches with the help of his grandpa’s ghost. I really love that concept, by the way–having the ghost of your beloved grandpa by your side as you go though life. I’m sure this idea will strike a chord with many youngsters as well as a lot of adults. It’s hard to loose a beloved grandparent, and I, for one, still sometimes wish my grandpa was around to help me get through life.

Overall, I found this book to be just as well written as the first. The story was very engaging and fast paced, and once again carried a moral, which I think is very important for books targeted at tweens.