It is recommended for fans of Edgar Rice Burroughs, Karl Edward Wagner and Robert E. Howard.

“It’s a story about two people from Earth trapped in a parallel world that is sort of a “Land of the Lost” where, for reasons that become apparent during the course of the story, people and creatures from every era of Earth’s history have been snatched up and similarly stranded–some for so long that they no longer recall that their ancestors came from anywhere else,” says Frank. “In the course of trying to find a way back home, they encounter a kingdom of living Neanderthals, who are not cavemen but civilized humans with a culture similar to ancient Mongols or Scythians. They also find a city populated by Etruscans, the ancient pre-Roman rulers of Italy, who have discovered a way to manipulate the currents of dark energy in that parallel world to accomplish things that look like magic.” 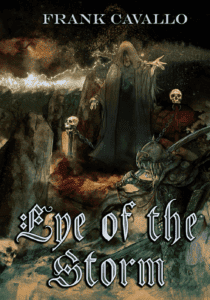 On a research mission in one of the most remote regions of the world, former Navy SEAL Eric Slade and Dr. Anna Fayne are caught in a mysterious storm. Catapulted through a rift in space-time, they are marooned on a lost world.

Struggling to survive and desperate to find a way home, they must confront the dangers of this savage land—a dark wizard and his army of undead—a warrior queen and her horde of fierce Neanderthals that stands against him—and a legendary treasure with the power to open the gateway between worlds, or to destroy them all: the Eye of the Storm.

“Eye of the Storm is a terrific fantasy from Frank Cavallo… Imagine being caught in the Eye of the Storm; chased by pterosaurs and other creatures that are supposed to be extinct, in a prehistoric setting that has traces of ancient Roman culture and other significant eras. Frank Cavallo’s novel has an intriguing, ongoing sequence of activities I really liked. He is very imaginative and it shows in his writing, which is descriptive and well defined.” – 5 Stars, Readers’ Favorite

Horror and dark fantasy author Frank Cavallo’s work has appeared in magazines such as Another Realm, Ray Gun Revival, Every Day Fiction, Lost Souls and the Warhammer e-zine Hammer and Bolter.
His latest novel, Eye of the Storm, was released in August 2016 by Ravenswood Publishing.

“In Eye of the Storm, I try to bring back some of the elements that I like from old time pulp fiction,” says Frank. “It is a throwback to old school adventure stories, combining the pacing and the feel of those classic tales with some newer elements that are not all that common to typical fantasy fiction.” 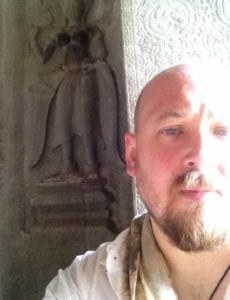 Frank’s previously published works include The Lucifer Messiah, The Hand of Osiris, and the Gotrek & Felix novella Into the Valley of Death. He is currently working on a new novel, The Rites of Azathoth, with Necro Publications, due out in February 2017.

Frank was born and raised in New Jersey. He graduated from Boston University with a degree in Communications in 1994 and he earned a JD from the Cleveland Marshall College of Law in 2001. He currently resides in Cleveland, Ohio, where he has been a criminal defense attorney for fifteen years.

To learn more, go to http://www.frankcavallo.com/