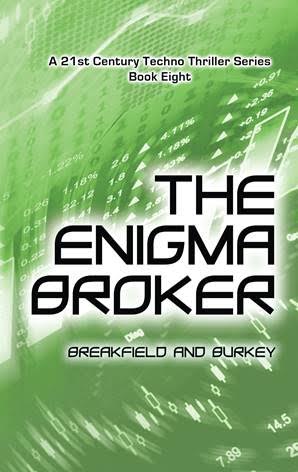 Let me start off by saying I love the packaging, the author sent me The Enigma Broker, along with a tote bag, book marks, and a shirt.  Possibly one of the best package we have received for a review.

We started with Book Eight, which is normally not recommended in a series, however, The Enigma Broker was well written so I was able to start that in the middle of the journey.

Let’s start with the about…

The Enigma Broker, the eighth book in The Enigma Series, takes readers on a thrilling journey into a dangerous digital underworld while raising troubling questions about our dependence on technology and our current obsession with social media avenues for communication. All around the world, commodity prices are plummeting, and nobody asks why. The steep drop in the markets for oil, copper, coal, and other commodities threatens to destabilize nations and bring them to the verge of economic collapse. Amid fears that further drops in value could devastate civilization, the R-Group quietly engages. The R-Group was formed during World War II. After delivering the Enigma machine to the British, they used their copy of the device to safeguard wealth and property from the Nazis. Today they use information-gathering and security capabilities to protect us from cyber-attacks. The R-Group uses their respected position with private and public entities to insure the right information is available for those responsible to make informed decisions. Jacob and Petra begin investigating the free fall in oil prices and soon discover disturbing clues that may implicate a “dark matter organization”—a shady organization that leaves no digital footprint behind. Meanwhile, ICABOD, the group’s supercomputer, teams up with government investigators to identify potential suspects. Quip and EZ also apply their special talents assiduously to the case but don’t let their work interfere with their blossoming relationship.

5 Star – Reviewed by Arya Fomonyuy for Readers’ Favorite-The Enigma Broker, Book 8 in The Enigma Series, a powerful thriller laced with realism that explores a phenomenon that could threaten the world’s civilizations and economy. The symptoms are very obvious — falling prices in commodities like oil, coal, copper and others — but it seems everyone is turning a blind eye to it. Perhaps no one seems to see the danger this could pose to the economy of entire nations. The R-Group’s attention is roused and they come in to investigate. What might have seemed to be a phenomenon that could be easily explained becomes a complex issue involving an underground system that could wreck humanity. It’s breathtaking to see skilled agents Jacob and Petra team up with other agencies to solve the mystery.

The Enigma Broker handles a danger that could be very real. Those who have read earlier works in the series, like Enigma Rising, will enjoy the author’s mastery of technology and current issues. I enjoyed how authors Breakfield and Burkey integrated social media and technology into this engaging page-turner. The conflict starts from the very first page of the story. I love characters that always have something threatening them, a problem they have to solve, a mystery to understand. Such are the kinds of characters readers will encounter in The Enigma Broker and the sense of impending danger that permeates the entire story makes it even more interesting to read. This series will grab the interest of fans of thrillers and readers who love works featuring high technology and high stakes. Highly recommended!

KIRKUS REVIEW-In Breakfield and Burkey’s (The Enigma Gamers, 2016, etc.) latest series installment, predatory pricing in the commodity markets may be part of a much bigger and more sinister plan.

Mike Patrick, the CEO of multinational commodities broker ePETRO, notices a conspicuous increase in oil companies’ production numbers. It’s soon apparent that none of the companies are overproducing, so someone must be tampering with the figures. This scheme not only hurts the companies themselves by dropping commodity prices, but it also harms other firms that are developing renewable energy technology, as they could lose investments. Mike calls Jacob Michaels, who did security work for him before joining the R-Group, a family-owned and -run business that combats cyberattackers. An unnamed U.S. government agency also requests R-Group’s help in explaining the plummeting prices of oil and other materials, such as coal. Jacob immediately suspects that the culprit is a “Dark Matter Organization,” manipulating commodity markets for its own purpose. It turns out that a DMO is indeed responsible, and its leadership assigns an enforcer named LJ to make sure that no one identifies them or their “carefully orchestrated plan.” This puts both Jacob and his lover, Petra, in peril when they take their investigation to London. Readers new to the series may be intimidated by the many characters in Breakfield and Burkey’s book, most of whom are returning, such as R-Group veterans Otto, Wolfgang, and Quentin “Quip” Waters. But the authors handle their players as skillfully as casino dealers handle cards, and the various subplots are consistently engaging. The main storyline is energized by its formidable villains: LJ is dangerous, but his boss is unquestionably more so–a bad performance review, for example, can end in death. The authors also sprinkle welcome touches of romance throughout, involving quite a few couples–one of whom plans to get married. The humor is more subtle but equally satisfactory, such as Mike’s private insults regarding his boss, the ePETRO chairman.

Another exciting thriller entry in a series that shows no signs of slowing down.

I have to tell you I have found a new favorite author, Charles V Breakfield and Roxanne E Burkey have put together The Enigma Series packed with thrills and intrigue. Take a look at this trailer I found on their website www.enigmabookseries.com

I’m a big fan of conspiracy novels and books that make you think reading The Engima Broker, I felt as if I was part of the team, helping the uncover clues, a few times my hunches were right and other I was thrown a Technological curve ball. Probably because I work on computers I loved the run-ins with the Sinister genius, the author was able to skillfully make the character’s relatable and adds touches of romance throughout the book.

The Technology basis of the book was spot on.  This is a Techno Thriller series is here to stay, if you have not grabbed a copy of The Enigma Series don’t wait another day, this is a fast pace read as you want to turn the page to see what is happening next.