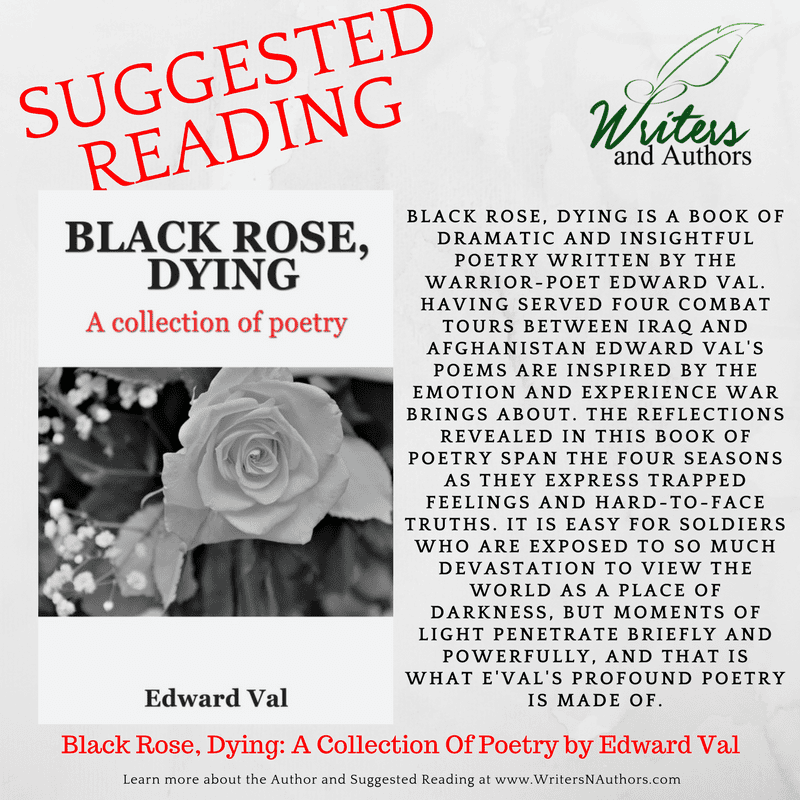 I thought this book was going to help me understand the author in a way, but at the end of the day I found me parts of me in it. He describes his feelings in such a simple yet complex way. The way he expresses himself in such a hard time in his life, from his relationship at home to the worst times at war. Every page, every sentence, every word was written from the soul and you can see it in this book.

At first I didn’t know what to think about the book, I was a little apprehensive of getting it, I ended up downloading a sample on my kindle and I was immediately hooked from then. Edward Val is a very talented writer. Keep on writing Handsome.

Black Rose, Dying is a book of dramatic and insightful poetry written by the warrior-poet Edward Val. Having served four combat tours between Iraq and Afghanistan Edward Val’s poems are inspired by the emotion and experience war brings about. The reflections revealed in this book of poetry span the four seasons as they express trapped feelings and hard-to-face truths. It is easy for soldiers who are exposed to so much devastation to view the world as a place of darkness, but moments of light penetrate briefly and powerfully, and that is what E’Val’s profound poetry is made of.

Edward Val comes by his warrior status authentically and gravely: Born in Camden, N.J., in early 1983, he has survived four Army deployments as an infantryman. One in Afghanistan and three in Iraq; wounded in combat, he’s received a Purple Heart and lost many friends and brothers to battles’ ravages. As a wordsmith, he’s published a previous poetry collection, Enlightened Heart/Darkened Soul; at this moment, he’s working on a third book of poems to be titled “As I Wait for Death” and a novel to be titled “Of Tooth and Nail”. Personally, E’Val is a father and a man of art and passion who wishes to create in all facets of his life and effect change in the world.

If you are a fan of poetry this is a must buy. The author really put his emotions into this book you can really feel how Edward Val felt when he wrote this collection of poems. I must also add he writes a lot of these poems while serving his country and I have had the honor of serving with him please support this warrior.